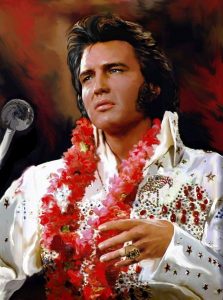 Presley grew up dirt-poor in Tupelo, moved to Memphis as a teenager, and, with his family, was off welfare only a few weeks when producer Sam Phillips at Sun Records, a local blues label, responded to his audition tape with a phone call. Several weeks worth of recording sessions ensued with a band consisting of Presley, guitarist Scotty Moore, and bassist Bill Black. Their repertoire consisted of the kind of material for which Presley would become famous: blues and country songs, Tin Pan Alley ballads, and gospel hymns. Presley knew some of this music from the radio, some of it from his parents’ Pentecostal church and the group sings he attended at the Rev. H.W. Brewster’s Black Memphis church, and some of it from the Beale Street blues clubs he began frequenting as a teenager.

Presley was already a flamboyant personality, with relatively long greased-back hair and wild-colored clothing combinations, but his full musical personality did not emerge until he and the band began playing with blues singer Arthur (“Big Boy”) Crudup’s song “That’s All Right Mama” in July 1954. They arrived at a startling synthesis, eventually dubbed rockabilly, retaining many of the original’s blues inflections but with Presley’s high tenor voice adding a lighter touch and with the basic rhythm striking a much more supple groove. This sound was the hallmark of the five singles Presley released on Sun over the next year. Although none of them became a national hit, by August 1955, when he released the fifth, “Mystery Train,” arguably his greatest record ever, he had attracted a substantial Southern following for his recordings, his live appearances in regional roadhouses and clubs, and his radio performances on the nationally aired Louisiana Hayride. (A key musical change came when drummer D.J. Fontana was added, first for the Hayride shows but also on records beginning with “Mystery Train.”)

Presley’s management was then turned over to Colonel Tom Parker, a country music hustler who had made stars of Eddy Arnold and Hank Snow. Parker arranged for Presley’s song catalog and recording contract to be sold to major New York City-based enterprises, Hill and Range and RCA Victor, respectively. Sun received a total of $35,000; Elvis got $5,000. He began recording at RCA’s studios in Nashville, Tennessee, with a somewhat larger group of musicians but still including Moore, Black, and Fontana and began to create a national sensation with a series of hits: “Heartbreak Hotel,” “Don’t Be Cruel,” “Love Me Tender” (all 1956), “All Shook Up” (1957), and more.

From 1956 through 1958 he completely dominated the best-seller charts and ushered in the age of rock and roll, opening doors for both white and Black rock artists. His television appearances, especially those on Ed Sullivan’s Sunday night variety show, set records for the size of the audiences. Even his films, a few slight vehicles, were box office smashes.

Presley became the teen idol of his decade, greeted everywhere by screaming hordes of young women, and, when it was announced in early 1958 that he had been drafted and would enter the U.S. Army, there was that rarest of all pop culture events, a moment of true grief. More important, he served as the great cultural catalyst of his period. Elvis projected a mixed vision of humility and self-confidence, of intense commitment and comic disbelief in his ability to inspire frenzy. He inspired literally thousands of musicians—initially those more or less like-minded Southerners, from Jerry Lee Lewis and Carl Perkins on down, who were the first generation of rockabillies, and, later, people who had far different combinations of musical and cultural influences and ambitions. From John Lennon to Bruce Springsteen, Bob Dylan to Prince, it was impossible to think of a rock star of any importance who did not owe an explicit debt to Presley.

Beyond even that, Presley inspired his audience. “It was like he whispered his dream in all our ears and then we dreamed it,” said Springsteen at the time of Presley’s death. You did not have to want to be a rock and roll star or even a musician to want to be like Elvis—which meant, ultimately, to be free and uninhibited and yet still a part of the everyday. Literally millions of people—an entire generation or two—defined their sense of personal style and ambition in terms that Elvis first personified.

As a result, he was anything but universally adored. Those who did not worship him found him despicable (no one found him ignorable). Preachers and pundits declared him an anathema, his derived hip-swinging stage style and breathy vocal asides obscene. Racists denounced him for mingling Black music with white (and Presley was always scrupulous in crediting his Black sources, one of the things that made him different from the Tin Pan Alley writers and singers who had for decades lifted Black styles without credit). He was pronounced responsible for all teenage hooliganism and juvenile delinquency. Yet, in every appearance on television, he appeared affable, polite, and soft-spoken, almost shy. It was only with a band at his back and a beat in his ear that he became “Elvis the Pelvis.”

In 1960 Presley returned from the army, where he had served as a soldier in Germany rather than joining the Special Services entertainment division. Those who regarded him as commercial hype without talent expected him to fade away. Instead, he continued to have hits from recordings stockpiled just before he entered the army. Upon his return to the States, he picked up pretty much where he had left off, churning out a series of more than 30 movies (from Blue Hawaii [1961] to Change of Habit [1969]) over the next eight years, almost none of which fit any genre other than “Elvis movie,” which meant a light comedic romance with musical interludes. Most had accompanying soundtrack albums, and together the movies and the records made him a rich man, although they nearly ruined him as any kind of artist. Presley did his best work in the 1960s on singles either unconnected to the films or only marginally stuck into them, recordings such as “It’s Now or Never (‘O Sole Mio’)” (1960), “Are You Lonesome Tonight?,” “Little Sister” (both 1961), “Can’t Help Falling in Love,” “Return to Sender” (both 1962), and “Viva Las Vegas” (1964). Presley was no longer a controversial figure; he had become one more predictable mass entertainer, a personage of virtually no interest to the rock audience that had expanded so much with the advent of the new sounds of the Beatles, the Rolling Stones, and Dylan.

By 1968 the changes in the music world had overtaken Presley—both movie grosses and record sales had fallen. In December his one-man Christmas TV special aired; a tour de force of rock and roll and rhythm and blues, it restored much of his dissipated credibility. In 1969 he released a single having nothing to do with a film, “Suspicious Minds”; it went to number one. He also began doing concerts again and quickly won back a sizable following, although it was not nearly as universal as his audience in the 1950s—in the main, it was Southern and Midwestern, working-class and unsophisticated, and overwhelmingly female. For much of the next decade, he was again one of the top live attractions in the United States. (For a variety of reasons, he never performed outside North America.) Presley was now a mainstream American entertainer, an icon but not so much an idol. He had married in 1967 without much furor, became a parent with the birth of his daughter, Lisa Marie, in 1968, and got divorced in 1973. He made no more movies, although there was a good concert film, Elvis on Tour. His recordings were of uneven quality, but on each album he included a song or two that had focus and energy. Hits were harder to come by—“Suspicious Minds” was his last number one and “Burning Love” (1972) his final Top Ten entry. But, thanks to the concerts, spectaculars best described by critic Jon Landau as an apotheosis of American musical comedy, he remained a big money earner. He now lacked the ambition and power of his early work, but that may have been a good thing—he never seemed a dated relic of the 1950s trying to catch up to trends but was just a performer, unrelentingly himself.

However, Presley had also developed a lethal lifestyle. Spending almost all his time when not on the road in Graceland, his Memphis estate (actually just a big Southern colonial house decorated somewhere between banal modernity and garish faux-Vegas opulence), he lived nocturnally, surrounded by sycophants and stuffed with greasy foods and a variety of prescription drugs. His shows deteriorated in the final two years of his life, and his recording career came to a virtual standstill. Presley never seemed confident in his status, never entirely certain that he would not collapse back into sharecropper poverty, and, as a result, he seems to have become immobilized; the man who had risked everything, including potential ridicule, to make himself a success now lived in the lockstep regimen of an addict and recluse. Finally, in the summer of 1977, the night before he was to begin yet another concert tour, he died of a heart attack brought on largely by drug abuse. He was 42 years old.

Almost immediately upon hearing of his death, mourners from around the world gathered at Graceland to say farewell to the poor boy who had lived out the American dream. In a way, that mourning has never ceased: Graceland remains one of the country’s top tourist attractions, and Presley’s albums and other artifacts continue to sell briskly. Each August crowds flock to Graceland to honor him on the anniversary not of his birth but of his death. From time to time rumors cropped up that he did not really die, that his death was a fake designed to free him from fame. Elvis impersonators are legion. His biggest fans—working-class white women, almost exclusively—passed their fanaticism on to their children, or at least to a surprising number of daughters. “Elvis has left the building,” but those who are still inside have decided to carry on regardless. Once more, Elvis Presley is triumphant, although this triumph is shadowed by something far less than happiness.

Comments Off on Elvis Presley | Biography

No Related Posts Yet! 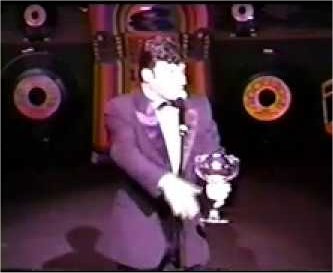 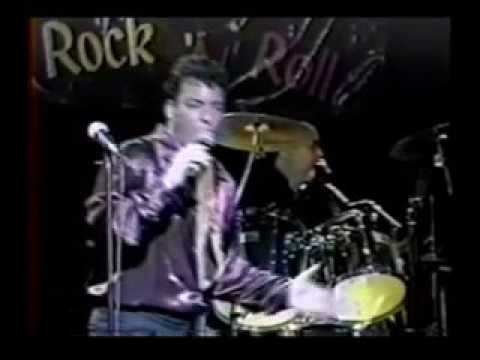